Last year proved to be a gold speculator and investor’s dream after gold prices rallied hard to hit historical highs thanks to a perfect storm of a global pandemic, massive government stimulus packages, weakening dollar, and a stock market bull run that had finally run out of gas. The torrid rally represented the sharpest gain the metal has mustered in more than a decade, with gold prices nearly doubling between August 2018 and August 2020.

Gold prices have been in the dog house for much of the current year ever since the Federal Reserve signaled higher interest rates amid expectations of rising inflation, while a brawny dollar has not been helping matters.

Luckily for the bulls, the yellow metal has lately been receiving support from unexpected quarters.

Gold prices have climbed to their highest level in nearly three months in tandem with a weaker dollar as U.S. inflation hit new highs. Gold is traditionally regarded as an inflation hedge though it has a mixed track record in that regard. Indeed, gold is a proven long-term hedge against inflation, but its performance in the short term is less convincing.

Meanwhile, a gold-buying spree in India linked to Diwali festivities has helped boost demand and prices.

Spot gold has surged nearly 4% over the past five trading sessions to trade at $$1,857.90 per ounce on Thursday, a level it last touched in June with a cross-section of Wall Street punters saying the commodity is now poised for a breakout.

The bulls currently have the upper hand, with gold having broken the previous resistance at $1,830-$1,835. 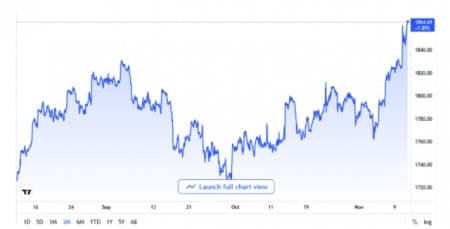 Cusp of a breakout

Inflation numbers for the month of October came in worse than expected, with the Consumer Price Index (CPI) jumping 6.2%, a 31-year high.

CPI increased 0.9% on a monthly basis against the 0.6% estimate.

Annual core inflation clocked in at 4.6%, compared with the 4% expectation and the highest since August 1991.

In a separate report by the Labor Department, real wages after inflation fell 0.5% from September to October, with a 0.4% increase in average hourly earnings more than offset by the CPI surge.

“Inflation is clearly getting worse before it gets better, while the significant rise in shelter prices is adding to concerning evidence of a broadening in inflation pressures,” Seema Shah, chief strategist at Principal Global Investors, has told CNBC.

The Fed has conceded that inflation has been more persistent than expected, but says it expects the situation to return to normal in a year or so. Surging inflation could force the Fed to tighten policy more quickly than it has signaled though it has been insisting that interest rate hikes are still off in the future.

According to the CME’s FedWatch tool, traders are currently pricing in two rate increases in 2022 and about a 44% probability of a third hike.

Inflation matters aside, a gold-buying spree in India has been giving the precious metal a boost.

The India Gem and Jewellery Domestic Council Chairman estimates that gold sales this year will be 15-20 percent above pre-pandemic levels (2019), while the India Bullion and Jewellers Association (IBJA) has reported that sale of gold on Dhanteras across the country this year was about 50 tonnes, valued at over Rs 20,000 crore. That’s a 67% jump compared to Dhanteras in 2019 that saw gold worth Rs 12,000 crore change hands. Dhanteras festival marks the first day of Diwali celebrations