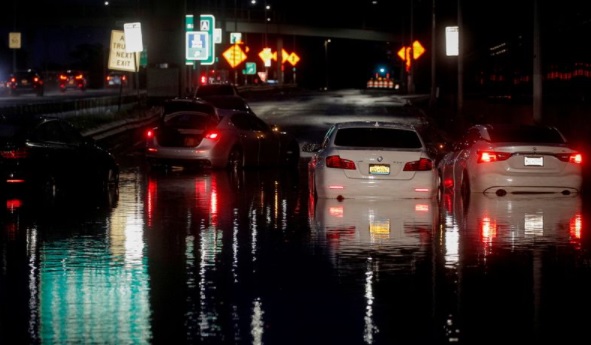 Climate change is an “emerging threat” to U.S. financial stability that regulators should address in their everyday work, a top U.S. regulatory panel said on Thursday, a first for the United States which has lagged other wealthy countries on tackling financial climate risks.

The Financial Stability Oversight Council (FSOC) issued a 133-page report https://home.treasury.gov/system/files/261/FSOC-Climate-Report.pdf that could ultimately lead to new rules and stricter oversight for Wall Street. It provided a roadmap https://www.reuters.com/business/cop/key-recommendations-us-treasurys-financial-climate-risk-report-2021-10-21 for integrating climate risk management into the financial regulatory system.

That includes filling in data gaps, pushing for climate-related disclosures by companies, beefing up climate expertise at agencies, and building tools to better model and forecast financial risks, such as scenario analysis.

The FSOC comprises heads of the top financial agencies and is chaired by Treasury Secretary Janet Yellen. Created following the 2007-09 financial crisis, its role is to identify and address vulnerabilities in the U.S. financial system.

The report is part of President Joe Biden’s plan to aggressively tackle climate change and comes ahead of his trip to Glasgow, Scotland, for a United Nations climate summit.

“It’s a critical first step forward to the threat of addressing climate change, but will by no means be the end of this work,” Yellen said of the report.

With Biden’s climate agenda stalling in a divided Congress, the report will signal the world that the United States is serious about tackling climate risks, adding to the global debate on the issue.

“This is the first time that all of the banking and financial regulators will come out in one document and talk about what they can do on climate change,” said Todd Phillips, director of financial regulation at the Center for American Progress, a liberal think-tank.

Climate change could upend the financial system because physical threats such as rising sea levels, as well as policies and carbon-neutral technologies aimed at slowing global warming, could destroy trillions of dollars of assets, risk experts say.

In a 2020 report, the Commodity Futures Trading Commission (CFTC) cited data estimating that $1 trillion to $4 trillion of global wealth tied to fossil fuel assets could ultimately be lost. With a record $51 billion pouring into U.S. sustainable funds in 2020, investors are pushing for better information on risks companies face from climate change.

U.S. regulators have done little to date to tackle climate risks, and the United States lags its peers on the issue. Biden, a Democrat, has said he wants every government agency to begin incorporating climate risk into its agenda.

The report also calls for the FSOC to create two new internal committees. One would consist of regulatory staff who will frequently report on efforts to police climate risks. The second will be an advisory committee of outside experts, including from academia, non-profits and the private sector.

The lack of recommendations for tough new rules frustrated some progressives and environmental groups, who are anxious for bold steps from Washington to address what Biden himself has called an existential crisis.

“With a very small window to prevent the next climate disaster, each agency must now provide specific timelines when they plan to put in place measures to protect the safety and soundness of our financial system, our institutions, our savings and our communities,” he said in a statement.