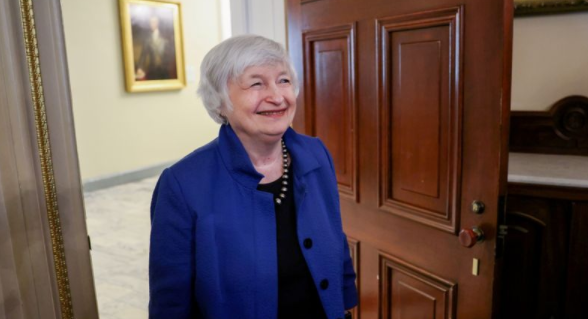 U.S. Treasury Secretary Janet Yellen acknowledged on Tuesday the use of carbon-pricing schemes such as a planned new European border levy but stressed such moves should take into account emission-cutting progress made in other ways.

Yellen was in Brussels a day before the European Union unveils a major package of measures to tackle climate change.

Among them, it will outline what a carbon border adjustment mechanism (CBAM), designed to cut emissions by creating financial incentives for greener production and by discouraging “carbon leakage,” as the transfer of operations to countries with less onerous emission restrictions is known.

“A carbon tax or carbon pricing cap-and-trade is a very efficient way to go about addressing emissions reductions, but there’s nothing that requires countries to proceed in that way,” she told Reuters in an interview.

“And it’s very important to think through if a country adopts a carbon border adjustment, how it should treat countries that have also achieved environmentally-friendly production techniques, but through different means,” she added.

She agreed that countries seeking to cut their own emissions were entitled to address possible carbon leakage.

“I think that’s an important principle, and it would apply to the United States when we get to that point, and certainly the European Union and other countries,” she said.

Yellen, in separate remarks to reporters in Brussels, said a carbon border adjustment mechanism would ensure that efforts to reduce carbon emissions in some countries did not shift high-emission activities to other countries with lower standards.

But she said there was broad recognition that more work was needed on how to integrate these mechanisms globally.

“There is a clear rationale for wanting to have it,” she said. “But we really have work to do to think about how these regimes should be interactive.”

The EU package to be unveiled on Wednesday is part of its efforts to cut net greenhouse gas emissions by 55% by 2030 from 1990 levels.

The European Commission has said its plan will be compatible with World Trade Organization rules and fair, requiring importers of goods such as steel to buy emissions certificates at the same price as domestic producers. But it has raised concerns in numerous countries.